We are dedicated to bringing you high quality vacation content.

Also try out our Discover tool to find the best vacation and travel sites to build your vacation, and our Organize tool to organize and coordinate your vacation plans with your family and friends.

That time I was almost murdered in my sleep in Vietnam

It was an adventure of a lifetime, we were set to make a loop through Cambodia, Vietnam, and Laos. We had come to explore and locate some lost American POW bones from the vietnam war (a story for another time). The group consisted of 3 of my buddies, myself, and two friends of one of my buddies a native Cambodian and a native Vietnamese.{@}

This particular event took place early on in the trip. We had been traveling a few days and had made it about a quarter of the way up Vietnam and found ourselves in Nha Trang with all the tickets on the sleeper train we needed sold out. The whole trip was on a pretty tight timetable so we really needed to make this train. We did have a nice ace in the hole, a native Vietnamese. He went over and started talking to the ticket counter rep and was over there for 15-20 minutes conducting some intensive haggling. We could see lots of hand gestures and all sorts of Vietnamese communication happening, of which we could understand absolutely zero.

He finally walks back over, and informs us of the deal he has brokered. We would be purchasing the bunk beds of some of the train employees directly. This definitely sounded a bit sketchy, but unfortunately it was our best option…

We still had another couple hours or so for the train to arrive, by this time it was around 11pm. Once it pulled in we were told to wait off to the side for all the other passengers to load. It was all very secretive, we were clearly operating outside the Vietnamese train rules. I must admit we were all pretty nervous, we had no idea if they were going take our money and leave us behind, or lead us off somewhere steal all of our stuff and then murder us. After all the other passengers were loaded, one of the train attendants came over and and lead us on this round about path to the other side of the train, and inside. We then followed them through all the backend parts of the train like the kitchen and maintenance cars, finally getting to the employee sleeper section. 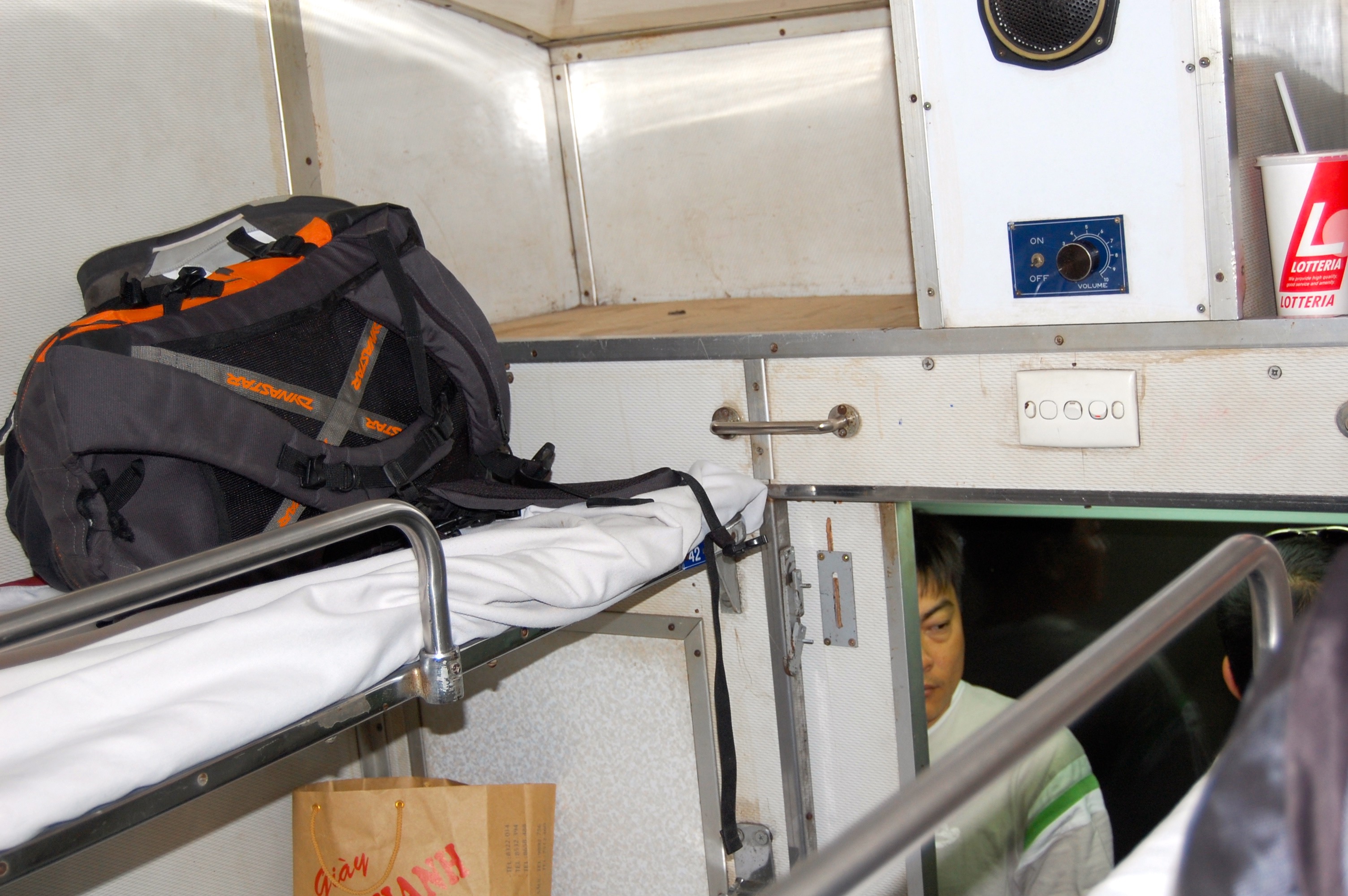 They started dropping us off in different rooms pointing at different bunks, telling us that was our spot. My buddies and I were all looking at each other with pretty nervous looks not really know what the heck was going on. The new fear was that they would simply wait for us to fall asleep, murder us, dump us in the Vietnam countryside, and steal our stuff.

The employees that had sold their spots to us were just going to sleep in the hallway outside our rooms, this certainly did not help to calm our fears…knowing they would be just right outside our door. Apparently though, they were very happy with the exchange, I think we were paying them around $15 which was a great supplemental wage for them. We of course felt bad that we were taking their spots, but that was much further in the back of our minds. We were mostly just hoping to arrive at our destination alive and with all of our stuff. Luckily as I said, we did have the native Vietnamese guy with us that was able to help assuage our fears.

Let’s just say it was a rough night of sleep, on top of the fear of getting murdered in my sleep or just having all my stuff and money stolen, the bed was really just a metal plank with a very thin pad. I do want to note that we were grateful to the employees, they had even more uncomfortable accommodations sleeping in the hallway and helped us keep on our schedule, and we would be fully appreciative once we arrived safely. I had a super nice DSLR with me so I was definitely most worried about that, besides my life, and tied the case straps directly to my body to prevent and shady dealings in the night. In fact, I tied all my possessions to my body, if one of the employees had any nefarious ideas, I would be alerted immediately when they tried to pull it free.

Well…I am here to tell the tale, so you know I made it out alive. I am happy report that all my companions made it out safely as well. As an added bonus, we retained possession of all our belongings. It was a crazy night, with terrible sleep, but we were able to keep on schedule and enjoyed a terrific rest of our vacation.

That time I almost died on a horse in India

Nate is an avid traveler and adventurer. He has been all over the world, and loves to share the vacation stories he has collected over the years.